Introduction to Beyond the Veil by Fatema Mernissi 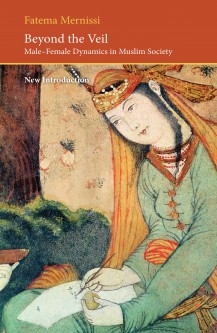 Fatema Mernissi is a Moroccan feminist and sociologist who is renowned for her work on women’s rights within Islam. Beyond the Veil is the result of her doctoral research and was first published in 1975; the edition I have, from 2011, includes a new introduction addressing the Islamophobia that currently permeates European politics and the West’s obsession with the veil.

So far I’ve only read the first few chapters of Beyond the Veil , and before I say anything about them I want to acknowledge a few things, namely that as a white European whose knowledge of Islam is limited I’m likely to get things wrong. Obviously it’s no one’s responsibility but my own to try to get them right, but I think that acknowledging my perspective and letting you all know that I’m more than open to hearing from people more knowledgeable than I am will make for a more productive discussion. So if I happen to be wrong, feel free to correct me, and if you happen to be knowledgeable about feminism and Islam, I would love to hear from you.

In the  introduction to the original 1975 edition, Mernissi says the following:

In this book I want to demonstrate that there is a fundamental contradiction between Islam as interpreted in official policy and equality between the sexes. Sexual equality violates Islam’s premises, actualised in its laws, that heterosexual love is dangerous to Allah’s order. Muslim marriage is based on male dominance. The desegregation of the sexes violates Islam’s ideology on women’s position in the social order: that women should be under the authority of fathers, brothers, or husbands. Since women are considered by Allah to be a destructive element, they are to be spatially confined and excluded from matters other than those of the family. Female access to non-domestic space is put under the control of makes.

Paradoxically, and contrary to what is commonly assumed, Islam does not advance the thesis of women’s inherent inferiority. Quite the contrary, it affirms the potential equality between the sexes. The existing inequality does not rest on an ideological or biological theory of women’s inferiority, but is the outcome of specific social institutions designed to restrain their power; namely, segregation and legal subordination in the family structure.

The point Mernissi makes in the second paragraph seems particularly important to me: gender inequality is not inherent to Islam, but is the result of specific  religious interpretations having been actualised into law, policy, and social practices. There are historical reasons for why these anti-equality interpretations trumped more progressive ones, and I can’t wait to read more of Beyond the Veil to find out what they were.

And of course, I’m also really looking forward to hearing your thoughts on the book.

I finished reading this book on Saturday and wow, there is so much to discuss in it. I thought I’d start a post here with a few general questions for discussion either in the comments, via email (if you email me at feministclassics[at]gmail[dot]com I will put them in a post), or on your own site if you have one. If you have more questions do comment with them or email them to me and I’ll add them in.

I know that the book is harder to find and so there will be less of us discussing the title this month, but I do hope that there will be a few who join in 🙂

Overall, did you like the book? Do you think the point was to like it? Do you think Saadawi (and her translator) conveyed the ideas she meant to? There are a large number of really graphic violent and sexual acts discussed or mentioned in the book. Do you think these contributed to the story in a positive way or did they sometimes detract from it?

There was a really interesting quote that read, on page 51, “Men have always been immoral. But now the women are throwing virtue overboard, and that will lead to a real catastrophe.” I thought this was an interesting double standard that is very rarely actually acknowledged. What did you think of this?

The title, God Dies by the Nile is explained in the ending chapters of the book. Throughout the book religion is shown as corrupt but it seemed to me it was shown as corrupt in how it was practiced rather than in its true form, and that the corruption of government led to and bolstered the corruption of the religion. And it isn’t really God who dies but rather the main cause of corruption in the town. In other books we’ve discussed this month authors used the Christian religion to bolster their feminist ideas. In this one Saadawi shows the corruption of religion and how women are being oppressed and mistreated through the religion. Do you think this is a generational thing that there is a now a dissatisfaction in the thought of religion helping, or is it the fact that the book was written as a novel rather than non-fiction, or (an idea I don’t agree with but I’m interested in hearing other views!) is it because she is talking about Islam as opposed to Christianity?

Saadawi was a big presence in the recent uprisings and protests against Mubarak’s regime in Egypt. She says that democracy and women’s rights go hand in hand and can’t be separated. Do you think this is a true point? The book we are reading this month ties the corruption in the government to the oppression of women in various ways, how do you think she shows it most? Do you think her current statements fit with her earlier ones (i.e. the book)? (For more, Afirca is a Country has numerous videos with her: an interview with Newsweek, a question and answer with Al Jazeera on the link between democracy and women’s rights, and a speech by her on her books and the uprising.)